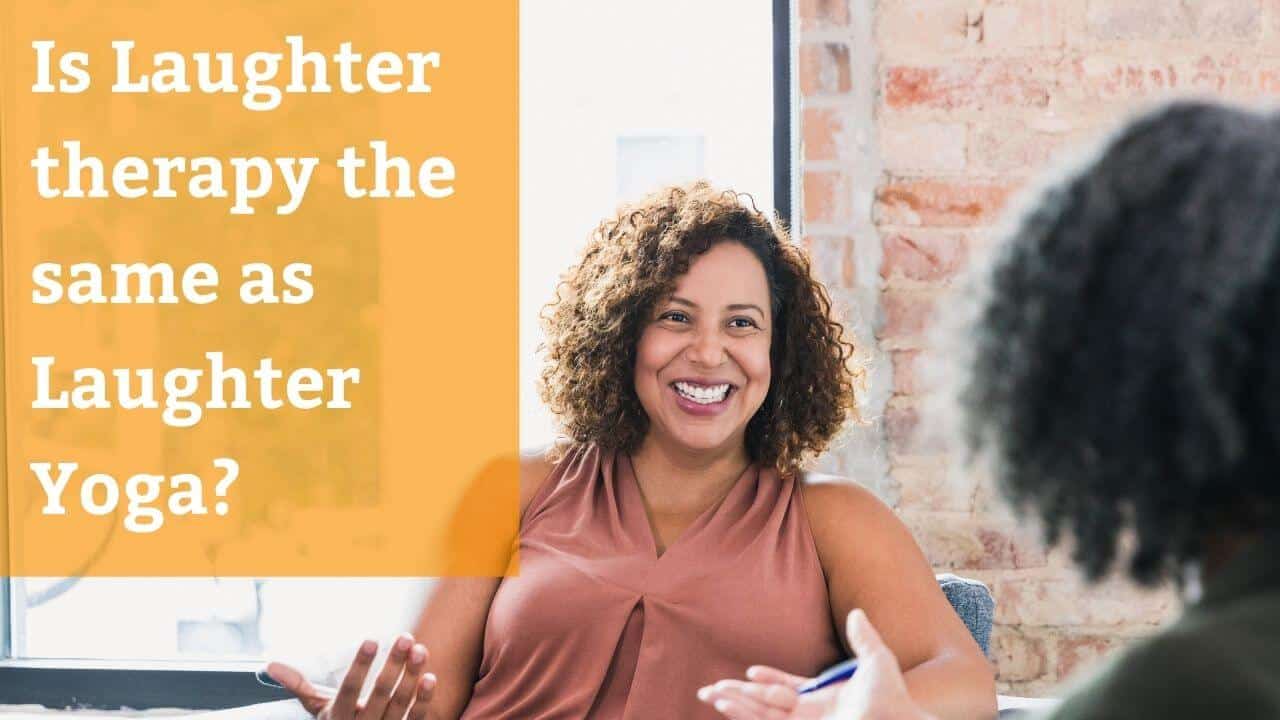 Laughter therapy stands out as the best medicine since time in memory. Enjoying a hearty burst of laughter has many benefits to your body and soul. When you laugh, your mood changes, the immune system becomes stronger, and you harness fast healing. People usually laugh when they hear some humor or watch funny events, but with laughter yoga you do not need a reason to laugh.

However, the chance for natural laughter is decreasing. People have compact schedules that deny them time to socialize and enjoy belly laughter. But scientists discovered that you can fake laughter. The good thing is you will have similar benefits whether the laughter is fake or genuine.

This aspect gave birth to laughing yoga. This type of yoga is gaining popularity across the globe, particularly during the Covid-19 pandemic. However, people are confusing it with laughter therapy. Probably, you are one of them. You are wondering, is laughter therapy the same as laughter yoga? Keep reading to get an answer.

Laughter is an old concept of therapy in the nursing field. This concept involves using various mechanisms to induce laughter in an individual. Traditionally, therapists used movies, humor, or comedy to easily make individuals laugh.

This type of therapy is common in a healthcare setting where patients and old age require laughter to enhance their healing processes. However, it is open to everyone considering laughter has universal benefits.

With time, the therapist noticed that it is hard for some people to enjoy a burst of genuine laughter. This idea is worrying. But the research found that the body will respond similarly to genuine or fake laughter. This discovery was a milestone.

In 1995, Dr. Madan Kataria introduced laughing yoga. This yoga is a form of laughter therapy that combines movements and breathing exercises to induce intentional laughter. It involves laughing without sharing jokes or humor.

Though people consider laughing yoga and laughter therapy as the same thing, the two are different. Laughing therapy involves humor to improve the person’s wellbeing or help them relieve pain and stress. It combines one or various aspects such as comedy, movies, books, jokes, funny stories, or any aspect that can make one laugh. Another term for this approach is humor therapy. The practice is also common in healthcare settings.

On the other hand, laughter yoga involves a combination of breathing exercises, activities, and movements that induce laughter. This yoga does not involve sharing of humor as the reason for laughter. Instead, people fake laughter through different sentiments and activities.

Also, the concept centralizes on the contingency aspect of laughter. Laughter is infectious, and you are likely to laugh when you notice other people are laughing even though you do not know the reason behind it. This aspect makes laughter yoga a new way for gaining the lost benefits of laughter as one can practice it at any place.

The similarity between Laughter therapy and laughter yoga

Despite the differences, both laughter therapy and laughing yoga have the same benefits. You will gain all therapeutic benefits of laughter therapy when you participate in the laughing yoga sessions. Your body will get similar stimulations and production of the feel-good hormones regardless of whether your laughter is fake or genuine.

In a word, laughing yoga is a particular type of laughter therapy. It extends the benefits of laughter by adding breathing exercises. So, you will gain all the benefits without needing humor sessions or books.